Call Us
Find Us
Free Estimate

Home / Resources / Commercial Security / RFID Technology: Are Employee Implants the Next Wave of the Future?

Home / Resources / Commercial Security / RFID Technology: Are Employee Implants the Next Wave of the Future? 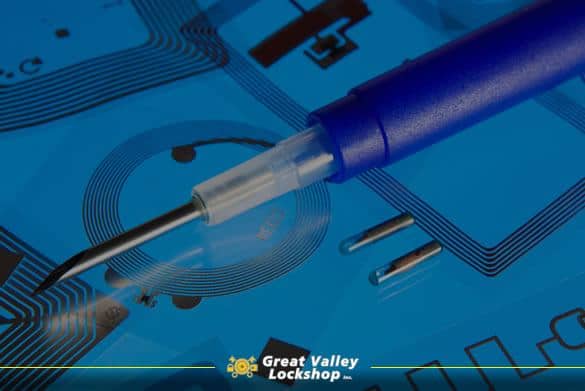 While human implantation of radio-frequency identification devices (RFID) are still not commonplace, it has been approved and deemed safe for this purpose by the Food & Drug Administration since 2004. However, a recent announcement by the company Three Square Market (32M), a tech company for micro-markets such as self-checkout services, has many people wondering if microchips are indeed the wave of the future.

The CEO of 32M, Todd Westby, released a statement declaring that the company will be offering employees microchip implants using RFID technology on a voluntary basis. According to Westby, over 50 employees have already signed up for the voluntary chipping. So, what’s the big deal that has more than 4 dozen workers so eager to be a part of this up and coming technology that still has many raising suspecting eyebrows?

In his announcement, Westby states that RFID technology will offer their staff numerous benefits when it comes to time management, security and overall convenience in the workplace. Staff will be able to use their microchip implants to quickly buy goods in the company break room, eliminating the need for cash or credit cards. With a quick hand motion, employees will have the ability to open secured doors and use copy machines that currently require swipe cards. Staff can also access their PC without the need to log in, and even business cards can be exchanged via microchips.

Being a technology driven company, it comes as no surprise that 32M would be a pioneer in leading the way for businesses to offer the convenience of microchipping to their employees. After all, Westby recognizes that RFID technology is the next evolution in payment and information storage systems, and he wants his company to lead the way in microchip advancements. Before discussing some current uses for these teeny tiny ‘helpers,’ let’s explore exactly what microchip implants are.

What is RFID Technology?

Microchips are about the size of a grain of rice and are typically sub-dermally implanted between the thumb and forefinger in a procedure that takes just seconds. Similar to pet microchips that helps reunite them with owners when they go astray, these integrated circuit devices are completely passive, meaning they are only active when they are being scanned. They are typically not tracking devices (although they could be if they are active devices) and they are enclosed in leak-proof shell so they are safe. Microchips essentially carry only the information that is stored within them. In the case of pets, it’s a unique ID number that’s stored in a database to identify ownership. In the case of 32M, it will be information relating to payment accounts, passwords and other information solely dedicated to performing specific functions.

Current and Future Uses for Microchips in Society

The idea of a cashless society is on the brink of becoming a reality, as RFID chips can store payment data and even identification confirmation for approving such purchases. Microchips have the potential to even surpass the benefits of smartphone ticket scanning, as there are no batteries that could expire in chips. This technology could be implemented within places such as retailers, fitness centers, parking garages, public transit, etc.

Is the era of physical drivers licenses, passports and other forms of ID coming to a close? Microchips could easily replace these, but many wonder what could happen if someone removes their chip and swaps it with someone else’s. What would this mean for criminal masterminds?

If you remember the company VeriChip Corporation, you may know that they distributed RFID devices that reportedly stored people’s medical records on chips, allowing for emergency care situations to be handled with greater expertise. However, the product has been discontinued from this company, but others have stepped into the game since their demise.

High-security facilities such as government buildings, power plants, high-end retailers, and data processing centers often utilize extreme measures such as fingerprint and retinal scans. However, microchips are quickly becoming a viable option that could eliminate the need for keyless and biometric entry systems or at least enhance them as a secondary method of authorization for entry.

What are the Potential Repercussions of Microchip Implants?

While still highly debatable, humans have been trying them out for quite a while. Thousands of Swedish residents have been chipped for an array of reasons, pets have been getting implanted for more than a decade, and there was a flurry of interest when the tech became FDA approved, with many exclusive clubs offering priority access to microchipped attendees. However, there are a few concerns to be addressed prior to RFID going mainstream.

Hacking enthusiasts are sure to test their skills as ‘breaking in’ and accessing chipped information. Cryptology and protection measures must be taken by companies offering these information filled devices.

Consider social media and dating sites such as Tinder and Match, that offer real-time tracking of potential hookups. These chips could be used for the same purposes, allowing individuals to be unwittingly stalked.

There are currently no reports of ‘forced’ microchipping programs in the US, and there are even laws in place and implementable fines within most states prohibiting such acts being mandatory.

So, with all this in mind, how would you respond if your company offered voluntary microchipping? Is it the wave of the future, and are you on board?

Looking for Security Solutions Beyond Microchipping?

If your company isn’t quite ready to embark on the RFID train and desire modern, yet proven safety and security measures for your commercial business, call us at (610) 644-5334, or send an email to [email protected]. Our team can help you tighten up access to sensitive materials and areas with our innovative locksmith solutions.

Chris is a Locksmith by trade and the owner of Great Valley Lockshop in Malvern PA. Chris is a volunteer firefighter and "Life Member" for East Whiteland Township Volunteer Fire Company and a huge Nascar fan who loves to go camping and enjoys the outdoors.

Let’s Get You A Free Estimate

Discover what thousands of our customers already know: When you hire Great Valley Lockshop you can expect us to be prompt, passionate and genuinely enthusiastic about your project!